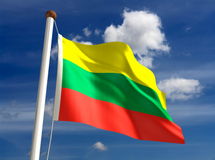 Country has an area of 65,200 square meters. Capital - is Vilnius. Lithuania state is located in the eastern Baltic Sea coast. French National Geographic Institute in 1989 found that Lithuania is the geographical center of Europe. Lithuania' neighbors - are Latvia, Belarus, Poland, Russia (Kaliningrad).
There are 2011 m. 3 239 032 residents. Density – 52,00 people./km².

Official language - Lithuanian language belongs to the Baltic language group (for this group also belong the Latvian and the dead Prussian language. This is the most archaic of all Indo-European languages. Many people also speak Russian, the younger generation - in English.

Euro is the currency of the Republic.

The climate in Lithuania is - an average medium-warm temperate zones, from the maritime going to continental. The average July temperature is about 17 ° C, and in winter is about -5 ° C. Record heat in Lithuania was +37.5 ° C, the cold record - was -42.9 ° C.

Lithuania - is a flat country, which make up about 75 percent of area of the country. The highest hills are: mountain of Ausktasis - 293.8 m Joseph - 293.6, Kruopine - 293.4 Forests and shrubs cover about 30 percent of Lithuania space.

Lithuania declared independence in 1918 the 16th of February and restored in 1990 the 11th of March (Lithuania became the first Soviet country that get it independence).

Air transport: Air transport connections with Lithuania are excellent. Lithuania has three international passenger airport - Vilnius (www.vilnius-airport.lt), Kaunas (www.kaunasair.lt) and Palanga (www.palanga-airport.lt). Vilnius with other major Western and Eastern European cities is scheduled routes connects by the 11 airlines, Kaunas - 3 airline, Palanga (coastal resort near the port city of Klaipeda) - 5 airline. Lithuania has a total number of 27 airports and airfields, most of them can take private planes.

Mobile GSM connection: in Lithuania there are three major mobile service providers - Omnitel, Bite GSM and Tele2, which ensure excellent communication not only in Lithuania but also in many countries around the world.

The general emergency number is 112 and works in all public telephone networks throughout the territory of the Republic of Lithuania. This number at any time and from mobile phone and also from a landline phone you can call free and notify the offense, any risk to life, health, safety, environment and so on and summon the emergency services.