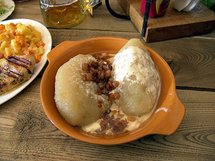 This is all culinary traditions which are spread in Lithuania and among Lithuanian people, the national Lithuanian kitchen. Though because of all historical links and influence it has a lot of similarities to other roundabout nations’ kitchens, it’s distinctions let us to talk about it as a separate tradition. Essentially we can expand Lithuanian kitchen to two separate and almost not relative traditions. It is Lithuanian noblemen’ (or Lithuanian antique) kitchen (was developing and flowered in these XV-XVIII centuries) and Lithuanian peasants’ (or redbrick Lithuanian) kitchen (established in XIX-XX c.)
Lithuanian noblemen’ kitchen qualitatively separated from other Baltic countries kitchens its’ dishes, products and the adjustment of them. There was a great usage of game and honey. Lithuania was the only country in the whole Europe where people could pay tribute by these products. The masters of those years ate cooked swans, smoked bears’ saddle and other elaborate dishes. Lithuanian noblemen’ kitchen wither in the XIX century, when Lithuania was losing its’ noblemen’ estate. The heritage of noblemen’ kitchen in the chunk survived in Poland kitchen, meanwhile there are only findings of fragments of it.
The peasants’ kitchen remained primitive till XIX century, backed-up the most necessary products and dishes. Nevertheless, it correlated with nobleman’ kitchen, it intercepted some of its’ discoveries. First of all, there was a great assortment of smoked products. Lithuanian peasants developed smoking traditions, using various types of wood, discovered slow smoking techniques. It was formed in Lithuanian smoked sausage products, valve, bacon, smoked fish, and so on. Peasant cuisine, as well as Latvian cuisine, most developed a variety of snacks, which was very convenient for the peasants who do not have time to production.
In Lithuania there are distributed more spice than in the other Baltic countries cuisines: abundant use of caraway, marjoram, parsley, dill. Since ancient times honey was the only sweetener.

In Lithuania there is a rather large cold snack table wich exists in all the Baltic countries kitchens. It is served in a variety of cheese, curd, milk products, smoked meat and fish products, meat jelly and various meat rolls.
There is a huge range of hot dishes. Noblemen' kitchen was very popular with baked ham, stuffed poultry, “zrazai”, it is a cutlet with mushrooms inside of it (taken from Polish cuisine). In a peasant cuisine was developing grains - meat dishes (medley), somewhat similar to the Latvian cuisine “putra” - wich is currently virtually excluded. Since the nineteenth century there spread dishes of potato - dumplings stuffed (dumplings), potato pudding, marmots, potato pancakes, samogitian pancakes, boiled potatoes with dills and with curd, curd or buttermilk, many of whom are considered as national Lithuanian dishes, although most of them are also known to neighbors and other cuisines: Ukrainian, Belarusian, Polish, Czech, and etc.
There is a quite big variety of dough dishes. Most of the dishes came into Lithuanian kitchen in XIV-XV century by the Mongols, and remained there, often changing products. This is - dumplings, "saltanosiai", scones and etc.
The majority of Lithuanian traditional desserts (fork, donuts) - is gentry kitchen heritage. However, in addition to them many popular desserts in Lithuania have arrived in twentieth century from west.
Peasants the most important drink was milk, sour milk, sometimes buttermilk. In ancient Lithuania has been prevalent mead and then later through the German kitchen came beer traditions.
Meanwhile, in the noblemen' kitchen was developed a rich assortment of alcoholic beverages. Somewhere in the ATR territory inventing vodka has inspired the emergence of new types of alcohol. Various tinctures, infusions, liqueurs, krupnik, stark - is a heritage of a rich culinary of the noblemen' legacy.