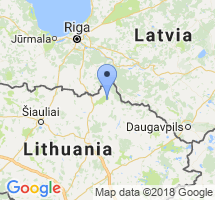 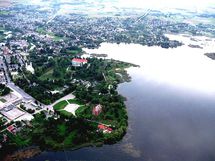 Birzai – the city is in the northern Lithuania, Panevezys district, 66 km to north of Panevezys. There are 14 277 (2010) residents. It is situated 201 km to north of Vilnius and 90 km to south of Riga, near the Latvian border. Urban monument (old town and the place if castle). The old part of the town is formed Valakas reform in the sixteenth century near the fortress according to a rectangular form plan in 1661-1662 extended by the architect T. Krel-Spinovski plan. City with a stronghold contained for the Renaissance era typical complex, the only one that the remained in Lithuania. in the year of 1923 city was growen. During the Second World War almost destroyed the historical part of architecture is not restored. Some of the old town is a cultural heritage.

The modern city was formed in the second half of the twentieth century. In the old town dominates Soviet-style brick buildings of 1-3 floors there square square resulting from when the square town hall was the extended. There stands romanticism neobaroco direction Birzai St. John the Baptist Church, built in 1861 (Architect Tom Tiseckis). Its interior is modified by forms of classicism. Near the square there is the neo-gothic Birzai Evangelical Reformed Church, built in 1874 m.