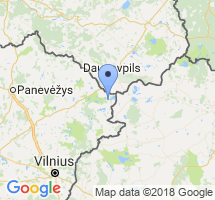 Visaginas - is the city in Utena district, 40 km to north-east of the Ignalina. It is the centre of Visaginas municipality. Population is 27 500 (2011). Area is 9.231 square kilometers. Date of its establishing is 1975. Best known for the nearby of Visaginas working the Ignalina NPP (6 km from the city, opened in late 1983, closed in late 2009). It is planned near the former nuclear power plant to build new nuclear power station in Visaginas. During the Soviet period there were mostly built flats of multi-service, in which were housed electrical workers. They were sent from the other edge of the Soviet Union, mainly Russian, because in Lithuania weren't a lot of EA professionals. Currently, the majority - is Russian, also live Belarusians, Ukrainians, Tatars. Russian language in Visaginas – is "lingua franca"(dominant language). Visaginas is the only town in Lithuania, in wich residents that talk Russian is a majority of all residents. Visaginas Ethnic composition: Russians - about 56%, Lithuanians - about 16%, Belarussians - about 10%, Poles - about 9%, Ukrainians - about 6%, Tatars - about 1%, others - less than 0.5%.