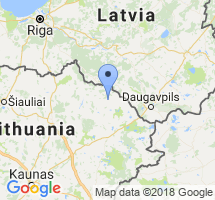 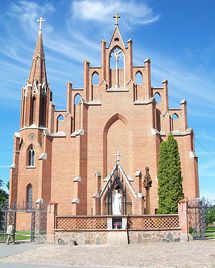 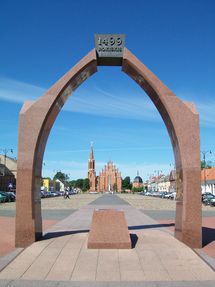 Rokiskis - is the city of north-eastern Lithuania, Panevėžys County (60 miles to north of Utena). Through the city flows Nemunelis' tributary Laukupe in wich valley is equipped several small ponds. It is urban monument - famous for its ancient architecture, beautiful cultural traditions, local history museum. There are 15 325 (2010) residents.
In the center stand Rokiskis St. Apostle Matthew the Evangelist Church (since 1877, with a chapel, churchyard fence with a gate), Rokiskis St. Alexander Neviskis Church (since 1939), a cemetery, the Old Believers community, Independence Square, the Palace of Culture, a post office, a central district hospital, a psychiatric hospital, to the north of the pond - Manorial (ensemble consists of 16 buildings in 1801, renovated in 1905 years) and Park, Land museum, a crib museum (opened in 2007 on Christmas), a former music school (from 1785, and after 1883 - 1904 years).