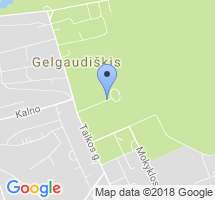 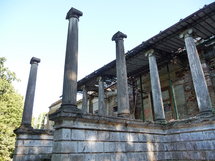 Gelgaudiškis is one of the oldest localities near the river Nemunas. According to historians, people already lived there in V-X c.

The origin of the town is related with foundation of Gelgaudai manor on the left bank of Nemunas (XV c.). In 1842-1846 Prussian baron Gustavas Henrikas Koidelis built a stone manor on a high slope of Nemunas valley. It has remained till now. In 1892 Koideliai sold the manor to Komarai. However, in 1920 during reform of land the manor was sold out. Children shelter was established there and until the Second World War it belonged to nuns. In the period of German occupation headquarters and later- military hospital was set up there.

After the war until 1961 children’s home functioned; from 1966- special school (boarding school), from 2005- Gelgaudiškis special school was established in household belongings of the manor.

Currently central mansion of the manor is waiting for restoration.

The manor of Gelgaudiškis is environed by an old park where you can find cognitive path. This is one of the oldest manor’s parks in Lithuania which is distinguished by difficult structure and strict geometric forms which pass into forest of Nemunas slopes. The main accent in this park is four-row silver maple alley which crosses the manor from the south direction. Moreover, there is a yard where you can see eight clearings cut precisely to cardinal points. This place is called a ‘star’. It is told that owners of the manor hunted there and feasted in the centre of the star as it was convenient to feast and see animals crossing clearings.

There are more places to visit, for example ‘Grave of notary’, ‘Devil’s hill’, ‘Graves of barons’, the thickest fir in Lithuania (height 42.54 m, diameter 10.2 cm) which has already dried off, and bell-flower of pure water. The forest of the park is strictly preserved.