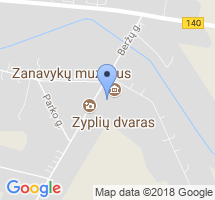 At one time Lithuania was a country of landlords. A lot of manor estates have remained till now. They are considered to be important cultural heritage as well as interesting places to visit. However, do many of them captures our attention and exhilarate us? After all, in former places of manors we often find miserably ruined walls, parks and pathways overgrown by shrubbery. Only a few manors are ‘alive’. It is possible visit them and find something heart-warming.

In Šakiai district there is one manor which is reborn for new life. In Zypliai village near a little town Lukšiai, 0.5 km from Kaunas-Šakiai road you can find catchy ensemble of Zypliai manor estate.

It was founded in the middle of XIX c. by landlord of Polockas Jonas Bartkovskis, who brought this property from Teresė Tiškevičienė in 1845. The new owner wanted to live near forest and make as much profit as possible so he built a manor nearby Lukšiai and named it New Zypliai. The place in which the manor was built formerly was called Palankiai. The landlord wanted to get on well with all local people. The manor had a huge influence on economic and cultural life during the time of Tomas Potockis. In 1891-1901 the count substantially restructured the manor estate. J. Bartkovskis built one-storey mansion and the new count added two-storey bulks, established western part of the park, drove paths-alleys which limit the park. In addition, there were many other innovations such as hothouse, pheasant aviary, fountains and two ponds. In 1897 all wooden outhouses burnt out because of steam engine. After the fire outhouses made of bricks were rebuilt. In 1912 in Warsaw the count suddenly died and was carried to Zypliai. It was told that the meeting of dead count was especially stately as all the court and servants went nearly half a kilometre to meet him. All the way was lighted up by huge vats of pitch. After Potockis’ death until World War I the manor was governed by his wife. In 1919 priests’ seminary was moved here from Seinai. Later school of agriculture was opened. During the years of war and postwar hospital, Russian farm office and executive committee functioned there.

Ensemble of Zypliai manor estate is composed of 13 buildings: mansion, two houses of servants, cow house, stables, barn, coach house, kennel and others. The estate is surrounded by the park which is one of the oldest in Lithuania. There you can find quite rare species of trees as sycamore maple, simple and red oaks, silver maples, white and balmy poplars and 380-year-old oak.

In 2001 Lukšiai doyen and folkartist Vidas Cikana with resources of local people initiated renovation and arrangement of the manor. Today’s vision of manor at that time was probably vague. However, purposeful work has been done in order to preserve cultural and architectural worth. Collapsing roof was mended up; cellars were cleared; drains and canalizations were resurrected; shrubbery near buildings, pond and park was pruned off. V. Cikana gave an example that arrangement of manor’s gallery did not require huge resources. The object needed concern, clearing and cleaning. After that you can see the real beauty and uniqueness of building or place. People see it and want to decorate and improve it.

In 2003 Šakiai region folkartists’ association ‘Dailius’ was established in the manor. Their activity started with exhibition of works in stables. From that time various works of art have been exposed (paintings, needlework, wood and stone sculptures, ceramics, smithery, glassware, masks). Zypliai manor became attended by artists, schoolchildren, guests, businessmen. Various presentations, conferences, meetings, feasts are organized here. The environment of manor creates great opportunities to arrange various feasts or creative art events. The presentation of Zanavykai speech vocabulary volume I, Language day, international day of tenders and cooperation, feasts for children, disabled, concerts by Kaunas religious music centre and other events were organized here. Various cultural confederations collaborate with activity of Zypliai manor so there are many cultural events. For example, young people from Kaunas implemented their project ‘Improve yourself’. Orphans and children good at art lived and created in Zypliai manor. At the end of the school year camps of catholic youth are held (in cooperation with Šakiai parish house).

Considering activity in the manor, there are as good fish in the sea as ever came out of it. By various means it is tried to reach even brighter vision. If dimensions were implemented, Zypliai manor would become centre of propagation and demonstration of live crafts. Outhouses would become workshops of smithery, stone, ceramics and wood. Sūduva region manors’ exhibition would be established in the central mansion. Rooms for exhibitions, representations would be equipped. Moreover, fund of Lithuanian film directors would be established where copies of documentaries would be preserved.
Even today Zypliai manor is a centre of cultural attraction. Local people make boast of it. It is an object of spiritual freshness and improvement. People who work here are happy that visitors feel fine and become morally healthier. According to V. Cikana, we should preserve spirit and uniqueness of the place so the essence is not the number of repaired walls but something which is alive and real, which invites to come and stay here. This place is designed for people, not for commerce. Works are done inventively depending on resources too.

Certainly, there are some financial, moral and bureaucratic difficulties. Only patient purposeful implementation of ideas, their protection from plagiarism and steady moral attitude guarantees the biggest success of activity and gives appreciable results.

Catchy Lukšiai town is a result of joint people work and implementation of good ideas. People who go through this town usually stop in the centre near a pond where they can go for a walk in a cosy park of stones or look at strange in shape wooden construction called ‘house of monkeys’ which appeared here when Lithuanian Tarzan arranged his exhibition in Lukšiai (he was born here). The doyen of Lukšiai Cikana decided to build something like ‘house of Tarzan’. Tee after tree and impressive object emerged in this place.

The park also appeared in itself. When one corner is cleaned up, another can’t be left. As a result, swells of green grass were formed as well as composition of pond, paths, wooden, stone and smithery articles were brought here. Suites of wedding are frequent visitors of the park. They find a lot of beautiful views and take pictures for their album. Cikana decided that it would be interesting to develop topic of wedding so in Zypliai manor you can see sculptures, wares and other elements considering marriage.

In winter when ice freezes to appropriate thickness sculptures of ice appear on the hill. Sometimes when nature has a joke and melts all beauty, they appear here again. Most effectively they look in the dark lamp lighted. However, in a day time lighted by sun these ice sculptures leave unrepeatable impression too.

Every year before Easter Lukšiai town is decorated by a huge Easter egg. This is one more realized idea of doyen and folkartist Vidas Cikana. The city is decorated with more works made by him. Neo-gothic St. Joseph Church can be called white pearl of the town. It was built in 1877. Antanas Tatarė who was priest, writer, and educator lived and worked in Lukšiai. Famous XIX c. sculptor Vincas Grybas originated from this town as well.

Roast ‘Zanavykai cheese’ and tasty glazed sweet curd ‘Uriga’ are produced in Lukšiai. They can be bought in many Lithuanian shopping centres.