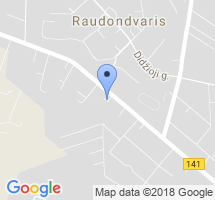 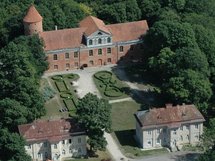 The town was first mentioned in Teutonic chronicles in 1392. The old castle was rebuilt after the battle of Grunwald and became king's property. In 1549 king Zygmunt II August presented the castle to his wife, Barbara Radziwiłł. After her death the castle fell to ruin. A new renaissance/neo-gothic red brick Tyszkiewicz palace was built in 1615 on high Nevėžis River bank. The palace, called "the castle" is surrounded by a park with a palm house (not in use any more). The residence was known for its remarkable fine arts collection, including paintings of da Vinci, Caravaggio, Rubens und del Sarto. The palace belonged to Tyszkiewicz family until the end of the World War I, when it was nationalized by Lithuanian government and converted into a school. Another notable building is St. Theresa basilique church founded by Benedykt Tyszkiewicz (rebuilt in 20th century) with Andriolli altars and Tyszkiewicz family tombstones.