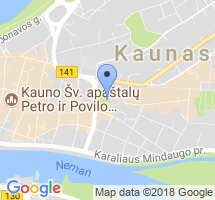 The historic Presidency gives an excellent opportunity to get acquainted with the development of modern Lithuanian statehood.
The construction of the future Presidential Palace began in the middle of 19th century. The Kaunas governorship office was established here in 1869. On September 1919, the President of the Lithuanian Republic and his staff moved into the building, after Lithuania had declared its independence on February 16, 1919 and Kaunas was named Temporary Capital.
During the period from 1919 to 1940, all three Presidents of the Lithuanian Republic, Antanas Smetona (1919–1920 and 1926–1940), Aleksandras Stulginskis (1922–1926) and Kazys Grinius (June – December, 1926) worked and lived in the Presidential Palace in Kaunas.

Representative portraits, works of art, historic photographs and authentic furniture that used to decorate the interior of the Presidential Palace are displayed in the museum. A unique collection of national awards, returned to the palace after an absence of 65 years, reflects the shaping, development, and comprehension of statehood and gives a special tone to the exposition.