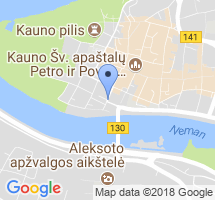 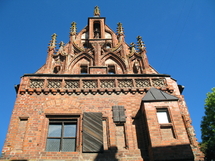 It is one of the most original and impressive examples of flamboyant Gothic architecture in Lithuania. The building was constructed in the late 15th century for Hansa merchants. In the 19th century, during the Romanticism period, a statue of Perkūnas (Thunder) was found in one of the walls, thus leading the building to be considered a pagan sanctuary. The first Drama theatre of Kaunas was established here in 1844. Presently, the House of Thunder belongs to the Jesuit gymnasium.