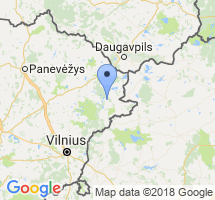 Ignalina – is the city of north-eastern Lithuania, Utena district, 110 km to north of Vilnius. It is the centre of Ignalina district municipality. Population is(2010) 5 949. Area is 6.9 square kilometers. Ignalina is located in the laky land - in the city standants The Green, Gavaitis, near the city - Gavys, Paplovinis, Palaukinis, Ilgis, Juodinis, Meksrinis. In the region of Ignalina there are over 209 lakes, which admired not only by the local, but also by coming people. Ignalina nuclear power plant was not in Ignalina, but in Visaginas - in twentieth century 2 nd half of the construction of the power plant the village was only developing (at that time - Snieckus name), thats why it is named by the name of the nearest city.