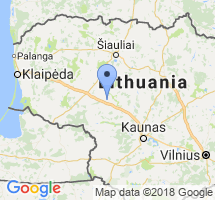 Raseiniai – is the city in western Lithuania, belongs to Kaunas district, 76 km north-west of Kaunas, in the southeastern foothills of Samogitian highland, near the highway of Zemaiciai. It is the center of Raseiniai Municipal. There are 12 363 (2010) residents, and the area is 8,5 km².
Visitors are always waited in the local Raseiniai history’ museum, it is exhibits not only unique for their expozitions, but also for the building wich was located in the former (1930 building) house of arrested political prisoners. The museum exhibits a set of the things that reveals Raseiniai history of literature, art, photography, numismatics, geology exhibits, as well as ethnographic objects and textiles.
When in Lithuania was introduced the Christianity, Raseiniai was one of the first places where the church of Catholic was built. Blessed Virgin Mary' Assumption to heaven Church with a former dominican monastery occupies the most important place if the city'culture life, for a long time been the main religion, science of light and fire, but the fickle and complex history of Lithuania made the experience good times and bad times.
The city was severely damaged during the Second World War, during which 90 percent of buildings were destroyed, so Raseiniai today - post-war city. The town has three ponds, there runs Raseikos creek.