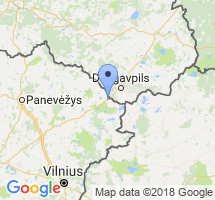 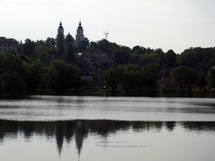 Zarasai – is the city of north-eastern Lithuania, Utena district, 49 km to north-east of Utena. It is the centre of Zarasai district municipal. Population is (2010) 7 571. It is urban monument, a resort area. There is Zarasai Blessed Virgin Mary of the Assumption church (built in 1878), Zarasai Orthodox church of All Saints, Zarasai’ Orthodox church (since 1992). Today Zarasai - is a beautiful city. The old town square has changed dramatically. Six radial streets go from the square. One of them refers to the lake of Zarasas as an arrow. Streets like these gives for Zarasai grace, well compatible to the area. City is located in the hilly lakes surronded site, in Zarasai Upland (part of Upland Aukstaiciai) in the northern part of the district, near the Latvian border. City is surrounded by lakes - in the southwest standants Zarasas, in the south - Zarasaitis, in south-east - white, and in east – there is a lake of Griezta. Zarasaitis and Griezta are conected by Laukesa stream with Zarasas and White appoints bridges. In southeast of the city - there is Maguciai forest.kiria tiltai. In the southeast of the city -there is Maguciai forest. The highest point is on the eastern bank of Zarasaitis and White lakes - Scout Mountain (170 m above sea level), on wich till 1954 stood the highest skiing in the Baltic States springboard. In 1994 30th of July in Zarasai is recorded the highest temperature in Lithuania (from the beginning of the measuring), it reached 37.5 ° C. Zarasai is surrounded by lakes from all sides. In its infancy the city was in one of the island in Zarasas, but now its limit is based on the seven lakes. From the hills that surronds the city it looks like up over the lakes.