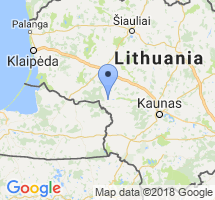 Jurbarkas – is teh city in central Lithuania, Taurage district, on the right bank of the Nemunas, near the mouth of Mituva (in the city Imsre flows into it), far from Taurage 45 km to southeast, from Kaunas - 86 km to the west. It is Jurbarkas region municipal center. It is urban monument. In the city stands St. Jurbarkas Trinity church (from 1907), Jurbarkas Evangelical Lutheran church, a former Orthodox church, monument of Vytautas. After 3 km to the west stands Bispilis mound, in the western outskirts of the city - Smukuciai pinewood, Jurbarkas pond. In the south from Jurbarkas, across the Nemunas there is built the longest bridge for cars in Lithuania (since 1978). Jurbarkas Park - is an architectural monument. To the west of the city lie forests of Smalininkai-Viesvile. Population is 12 972 (2010) and area is 13.28 square kilometers. There are number of classes in the city: an active Scout’ activities, the cultural center of Jurbarkas, 2009 in Lithuania it was recognized as the best cultural center of the highest category, there are several choirs, dance groups, theater and various ensembles. There is a fitness center and school, Jurbarkas handballers and especially orienteering have won many awards in Lithuania and abroad.