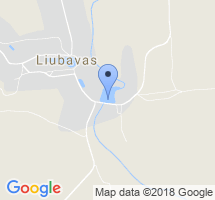 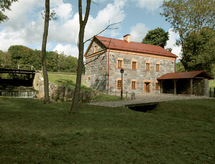 Liubavas Manor Museum was founded in the unique stonework mill of the manor. The museum was opened under the initiative of the artist, cultural and public activist Gintaras Karosas after the restoration of Liubavas Manor watermill not far away from Vilnius.

One of the oldest estates in Lithuania sits at a picturesque location near the River Gerėja, presently known as Žalesa. Until the middle of 16th century Liubavas manor belonged to the grand dukes of Lithuania. The ponds of Liubavas repaired at that time were thoroughly described in the treasury book of the Lithuanian ruler Žygimantas Augustas (Sigismund Augustus) back in 1546. Over the period of over five hundred years Liubavas has been governed by the representatives of the Lithuanian political, cultural and clergy elite, beginning with the royal family, the Duke Mikalojus Radvila Rudasis (Mikalojus Radvila the Red), the Golejevskis (Golejewski) family, the politicians Krišpinas Kiršenšteinas (Kryszpin Kierszeynsteyn) family, countess Teresė Tyzenhauzaitė, up to the count Tiškevičius (Tyszkiewicz) and the talented Slizienis (Slizien) families).

This monument of technological heritage tells the story of the manor and exhibits the authentic fixtures of the mill. The former miller's room in Liubavas Manor watermill now is turned into a visitor centre, and the production premises expose reconstructed milling, sifting and groat making equipment. The restored original water turbine, transmission, sack hoist, etc. are among most significant equipment.

We invite to visit the new museum and to get to know this romantic manor which name may be translated as "Love".

Other great place to visit nearby Liubavas Manor is Europos Parkas – the leading open-air modern art museum. Europos Parkas gives an artistic significance to the geographic centre of European continent and displays over 100 artworks created by artists from all over the world (www.europosparkas.lt). We invite to visit the both museums at the same day.