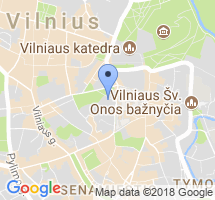 In the 14th century the first Bishop of Vilnius, Andrius Vasila, built a palace there, which was later decorated, rebuilt and expanded by its successive owners. In the 18th century, some reconstruction works of the Palace ensemble were carried out by Lithuanian architect Laurynas Stuoka-Gucevičius. In the 17th and 18th centuries, the Palace was devastated by fires, wars and disturbances. After Lithuania was made part of the Russian empire, the Bishops' Palace became a temporary residence of the Russian Emperor, dukes and other noblemen. The Palace, the most magnificent and respectable palace at that time, was also used for residence by Tsar Pavel I, the would-be King of France Louis XVIII, and French Emperor Napoleon. In the 19th century, the Palace became the official residence of the Russian Governor General. Governor-General Muravyov and twice Governor-General of Lithuania Mikhail Kutuzov lived there. In 1824-1834, the Palace was reconstructed to the design of Vasily Stasov, a renowned architect of the Tsar Court in St. Petersburg, acquiring its present-day shape. In 1920, before the loss of the Vilnius region to Poland, the Palace housed the Ministry of Foreign Affairs of the Republic of Lithuania. Later, between the two World Wars, it again became a venue for official ceremonies. Marshal Józef Piłsudski of Poland also stayed at the Palace. After of the Second World War, the Palace was converted into the Soviet Military Officers' Centre. In the 60s, it received new hosts, becoming the Artists' Palace. After the restoration of Lithuania's independence, part of the building housed the Embassy of France. At the end of 1995, renovation of the Palace began. In 1997, it became the seat of the President of the Republic.

Palace Tours are arranged on Fridays at 16.30 and on Saturdays from 9.00 to 14.30. Groups include 25 persons. Personal identification documents are required. Admission is free.
Reservations by phone (+370~5) 2664 073 or by e-mail ekskursijos@president.lt.

» «
Jessy Mark- CREDIT FIX 2021-08-24 10:37
Beware of imposters! I was scammed 3 consecutive times, until I found CYBER CREDIT GURU on a blog with positive reviews and recommendations, with faith, sometime last Month, I decided to give them a try, in less than 8 days, everything about my credit report was fixed, my FICO credit score increased from 516 to 801 excellent score. I strongly recommend CYBER CREDIT GURU, they are the best and most reliable credit repair firm. Reach out to them via +1(650) 239 7249 or Email: cybercreditguru(at) gmail (dot) com
globexpapers 2021-12-04 06:14
OMG, this is an awesome, very interesting article. I can imagine the energy and time you have invested in this powerful combination of words. Many articles I come across these days do not really dive this deep to make it clear to the audience as you did. But believe me, the way you interact is literally 100% perfect. I will instantly grab your RSS feed to stay informed of any updates you make on your blog and as well take the advantage to demonstrate
<a href="http://globexdocs.com/german-drivers-license-for-sale/"> WAYS OF GETTING GERMAN DRIVERS LICENSE LEGALLY</a> which many people are ignorant of when ordering fake documents online. Not over demanding I will also take the advantage to ask for your permission to join our 179.3k members <a href="http://t.me/joinchat/4bKnCn-OSSo3MTU5/">TELEGRAM GROUP</a>
to share with us your ideas or any latest update on your blog.
Thanks, I am Scott from Globex, we are expecting you on our platform.
globaltravels 2022-03-11 15:50
Thank you for sharing this helpful recipes. When I read one of your recipe ideas, I find myself working faster and more silently. In my spare time, I enjoy reading your blog postings and learning new things. I'd want to express my gratitude for your efforts. Outstanding effort <a href="https://www.globaltravelsdoc.com/buy-real-and-fake-documents-online/">BUY REAL AND FAKE DOCUMENTS ONLINE</a>
judithkhanli 2022-04-05 10:39
Waow Awesome information here ,this is unbelievable, it is my first time to be carried away by such a perfect profile article, I will immediately contact you directly and also to take the advantage to share some latest information about how to <a href="https://travelquicks.com/2022/01/20/hacked-credit-card-numbers-with-cvv-and-zip-code/">buy-fake-bank-statement-buy-real-bank-statement</a> ,I will also take the advantage to ask for your permission to join our <a href="http://t.me/bexuniversal/">TELEGRAM GROUP</a>
James Eric 2022-11-06 15:49
I was scammed over $1.850.000. I talked with this guy for 8 months. I sent him money via Bitcoin atm and bank account, I almost lost everything. But for the timely intervention of WZARD GARRY SPEEDHACK, who just in kick-off on time got back my $1.850.000. He is really good at what he does, I have recommended him to friends and co-workers who all became satisfied customers. He has helped me a lot in the trading industry, you can reach him for Everything. Hacking and Funds Recovering he is the best and has different skills in funds recovering and exposing scammers. Am glad and happy to recover my money, there is no shame in becoming a scam victim of one of these sophisticated and predatory operations. By reporting you may be able to recover some or all of your lost funds and prevent the scammers from targeting others. To recover your Scammed Bitcoin funds, Scammed funds, Clear or Erase Criminal Records, Mobile spy remote control access, Bitcoin Mining Contact this Genius Recovery Advocate. Email: wzardgarryspeedhack@gmail.com OR Whatsapp: +1 928 534 9618 Website: https://wzardgarryspeedhac.wixsite.com/my-site-1