The Gates of Dawn 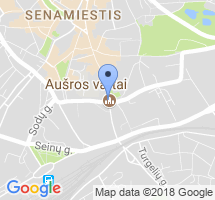 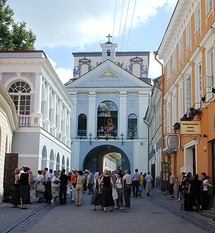 Due to frequent attacks on the Lithuanian lands from the Tatars and regular conflicts with the Grand Duchy of Moscow, in 1503 Grand Duke Alexander of Lithuania granted the city of Vilnius a privilege to build fortifications of brick and stone around the entire city. The story says that the foundation stone was laid in the place where the road sets out to Medininkai and beyond deep into the Grand Duchy's Russian lands via Oshmiany towards Minsk. After the stone was consecrated, the work began on building the gates which would later be known as the Gates of Dawn. No one knows when the construction work of the brick and stone walls was finished, but by 1522 the whole city was already ‘girt in stone'.
Since the Carmelites established in Vilnius, the painting of Our Lady which hang on the city gates then, constantly attracted the monks' attention. The Carmelites used to hold services at the painting in order to encourage devotion among the citizenry. In 1668, the city's authorities entrusted the monks with the care of Our Lady's painting and in 1671, thanks to the efforts of Fr Charles of the Holy Spirit, a wooden chapel was built to house the image.