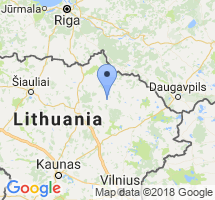 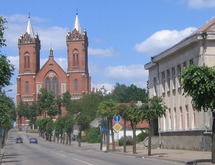 Kupiskis – the city is founded in 1480 (first mention), in north-eastern Lithuania, Panevezys district, 44 km to east from Panevezys, in the eastern Central Lithuania' lowlands outskirts. By the north-western outskirts of the city passes Levuo, through the center flows river Kupa, in the south runs railway line. In the Center of the city there are few brick buildings built by the eighteenth and nineteenth centuries, including the oldest linen store, thet is close to the Laurynase-Stuoka Guceviciaus Square. The main town bridge is a bridge of Kupiskis.
Plan of the city is rectangular, in the center stands neo-gothic two-towers Christ Going to Heaven church (built in 1914). There are extant two windmills (the late nineteenth century). To the north of the city stands Kupiskis (Aukstupenai) mound, there extends the lagoon of Kupiskis. There are 7 969 (2010) residents, the area is 7 km².