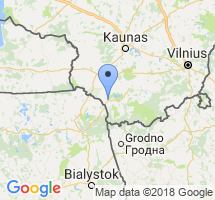 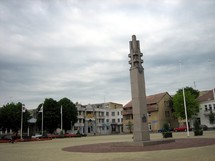 Lazdijai – the city in the district of Alytus, 52 km to southwest from Alytus, 7 km from the border with Poland. It is the center of Lazdijai district and local parish, Lazdijai urban ward. There is a post office. The birthday of the city is the 17 of May. In 1969 years march there was fixed record permafrost in Lithuania – 145 cm. There are 4 792 residents (2010) in Lazdijai, and its area is 4,8 km².
The region of Lazdijai – part of South Lithuania, called Dzukija. The cultural landscape – one of the main common Europe culture heritage component – there you will be surprised by the agreement between forests, waters and agriculture lands, which is replaced by thousands remisented archeological, historical and nature monuments. Herewith excellent fit developed service tourism, the hospitality of local residents, shows which reveals the hard of Dzukija people. The region is famous for the plenty of lakes, it is counted over one and a half hundred of them, and the area that they take reaches 10738 hectare. The biggest lakes are – Dusia (2334 ha), Metelys (1290 ha), Veisiejis (765 ha), Seirijis (503 ha). The lake called Dusia is very well-liked by yachtsmen, in other lakes fishermen will have a great moments. On the edge of the region flows the biggest river of Lithuania – Nemunas, on the southern edge – The White Ancia and Seira. The biggest and the most beautiful forest of the region is – the forest of Kapciamiestis. The forest Pertrakas and the forest of Dainava are involved in to state protected area. More about tourism in Lazdijai you can find http://lazdijai-turizmas.lt