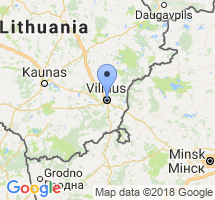 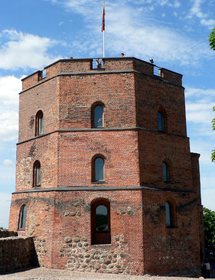 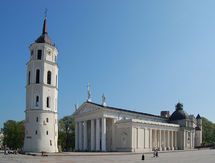 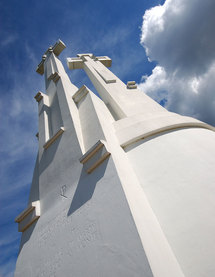 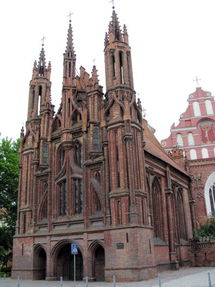 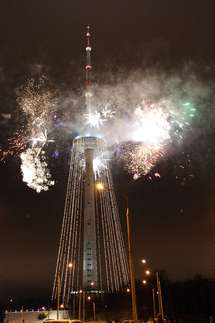 Vilnius – it is Lithuania' capital and yhe largest city of the country, in Vilnius district, the centre of the district and municipal. Population is 548 816 (2010). Area is 401 square kilometers. Date of established is 1323 (first mentioned). Vilnius is located in the south-east, in the confluence of the Neris and Vilnia, 24 km from the border of Belarus. Vilnius is the center of the archdiocese since 1579, - University city.
In the capital work the highest authority of the Republic of Lithuania - Presidential Palace, Parlament, government ministries, the Supreme and Constitutional courts, foreign embassies and representative offices, diplomatic missions, international organizations representes. In Vilnius there are even 23 monasteries - more than anywhere else in Lithuania. There are also remained about 40 different styles of the Catholic churches. Vilnius TV Tower is located on the slope of the river of Neris. Its height - is 326.4 meters. The city has 13 bridges over the Neris (three - pedestrian) and over 20 bridges over the smaller rivers - Vilnia, Verzuvą, Baltupis and others. According to the general plan of Vilnius, the city is divided into 41 districts.
Vilnius old town – it is the oldest part of the city of Vilnius, located on the left bank of the Neris in the south of Castle hill. It belongs to Old parish. This is one of the largest urban complexes in Eastern Europe, which emerged during middle ages. Area - is 3.59 square kilometers. It includes 74 blocks with 70 streets and lanes, 1,487 buildings with a total floor area - 1,497,000 sq meters. In the old town there is a lot of Catholic, Lutheran and Orthodox churches, residential houses, cultural and architectural monuments, museums. The Old town has formed a few hundred years, and here is immortalized history of the city and the most important cultural influence. Buildings and their elements belong to different architectural styles (Gothic, Renaissance, Baroque, Classicism, some Art Modern, which are usually harmoniously intertwined with each other and complement each other. In the Old town there are survived several authentic XIV-XIX buildings. In XV-XVI centuries were rapid constructed Gothic brick buildings: Franciscans, Dominicans, Bernardine monastery building, there are also new merchants' guild buildings, for Lithuanian Gothic architecture typical Orthodox churches. In the Old town there is the Castle Hill, on which top stands the tower of Gediminas Castle and the fortifications of the Upper residues. At the foot of Castle hill there is cathedral square, where stands a monument for Gediminas, Vilnius cathedral. From the Cathedral Square towards the Town Hall Square, continues Castle Street wich extensions - the Gates of Dawn and Grand Street - seeks to the former city wall at the Gates of Dawn. In the Town Hall Square there is the Town Hall (built in 1799 in classicism style, the architect Laurie Stuoka-Gucevicius). Town Hall Square was formed in the fourteenth century, when the city expanded. It dominated in the map of the city and highlighted its radial structure. In 1941-1943 in the Old town was working Vilnius ghetto. In 1994 the Old town is included in the UNESCO world cultural heritage list of the city wall at the Gates of Dawn. Since 2007 in Vilnius Old Town, in one of the few cities in the world,it is running audio guide tour, which offers Vilnius tourist information centers for the tourists(In Town Hall building and in Vilnius St. 22).