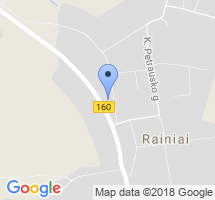 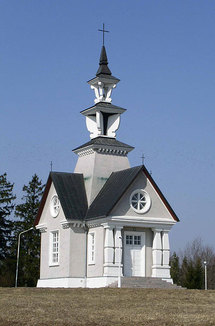 In the beginning of World War 2 in 1941, night from 24 June to 25 June the bolsheviks took 76 political prisoners from the former Telšiai prison to the Rainiai grove and brutally killed them.

When the second soviet occupation has started the unfinished chapel has been destroyed, the Rainiai grove has been cut out. The aim was to make people forget the awful tragedy and its perpetrators. Nevertheless, the suffering of Rainiai victims did not fade in the people‘s memory.

According the sketches of J. Virak the project of the chapel has been made by the chief architect of Telšiai district A. Žebrauskas. It was decided to erect the chapel in Rainiai, because there was no more room in the Telšiai cemetery.

Rainiai Martyrdom chapel has been sanctificated in 1991 commemorating the 50th anniversary of the martyrs slaughter. It perpetuated the memory of all victims of the soviet terror. The ceiling of the chapel are decorated with frescoes (author A. Kmieliauskas), where there are portrayed the Rainiai martyrs. The windows are decorated with the stained glass, portraying the suffering (author A. Dovydėnas).

In the chapel nearby the grove, where the political martyrs were tortured to death, has been erected a cross.