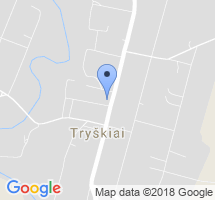 It is a small wooden estate built in the beginning of the XVIII century, long time ago belonged to the noblemen Šemetos. After the Napoleon‘s march to Russia a French lieutenant Pjeras Druvė settled down, whose family had lived in the estate till 1919. There was collected an enormous art collection, which was preserved during the World War 1, although in 1940 taken by the Russian soldiers to the unknown direction. Now nearby the estate there grow two huge oaks. One of them diameter is 6,20 m, the other one – 5,60 m.