Stained Glass Window, “The Battle of the Sun” 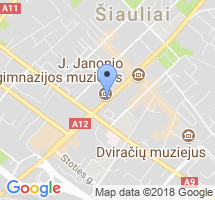 Lithuania's biggest stained glass window, "The Battle of the Sun", by Professor Kazys Morkûnas, is situated in the "Sun" Cinema. Its width is 200 square metres (length - 52 m.). It depicts the 1236 battle between the Lithuanian and Livonian Order armies and commemorates the 750th anniversary since the name of Šiauliai was first mentioned in historical chronicles.