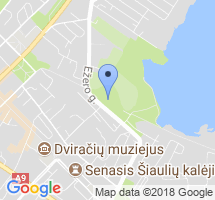 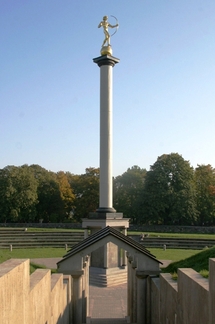 The extraordinary 750th anniversary of the city's existence in 1986 motivated the proper acknowledgment of the significance of this date. The competition for the reconstruction of the square was announced in 1981, and it was won by a trio of architects from Šiauliai:

A. Èerniauskas, R. Jurëla and A. Vyšniûnas. The centrepiece of Sundial Square is the gilded and bronze-ornamented decorative sculpture Šaulys (Archer) by Stanislovas Kuzma. It is almost four metres high. The sculpture, often referred to as the Golden Boy, and the numbers 12, 3 and 6, indicating the hours and infused into the pavement of the square in a way unify the three symbols of Šiauliai: the sun, representing the Battle of the Sun that took place on the city grounds, the archer that the city's name derives from, and the time that has passed since the name of the city was mentioned for the first time (in 1236). It is the highest sundial in Lithuania.