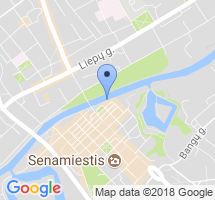 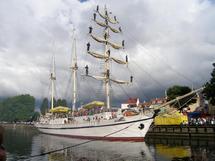 Walking along the river Danė and near the bridge you will see the sailing vessel "Meridianas". "Meridianas" was built in 1948 in Finland and is now one of the most beautiful sights of Klaipėda. The Klaipėda Navigation School used the sailing vessel for training purposes. When the vessel was laid up, it was turned into a restaurant and moored near the Dane River bank. Some ten years ago the owners who bought the vessel allowed it to fall into disrepair.
So a few years later the symbol of the city became nothing but a shadow of its former glory. The lawyer A. Žičkus then bought the Meridianas for a token sum of one Litas and the "Meridianas" once again became the symbol of Klaipėda. He organized a support fund and gave new life to the vessel. Today the restaurant "Meridianas" is again open to visitors.