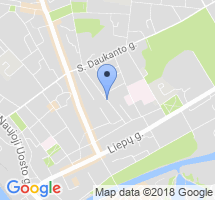 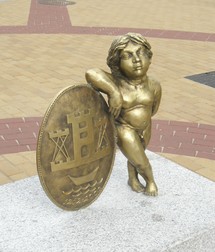 In 2008 summer in Mažvydo alley on one of the buildings in Tiltų Street appeared a sculpture of a small boy, decorating a city emblem of Klaipeda. The sculptor is Svajūnas Jurkus and the architect is Vytautas Paulionis. "Klaipėdietis" called decoration is about 45 cm high, a bronze sculpture.
"Klaipėdietis" as a gift for the city was created six years ago, celebrating the 750th anniversary of the city. The sculpture till now was in a closed room and decorated a library in Julius Janonis Street. The boy appeared earlier than it was built. This is not a sitting, but walking "Klaipėdietis", a little insolent. According to the authors, this sculpture does not have any magic powers, so there is no need to think wishes or to stroke it. You can just admire it.