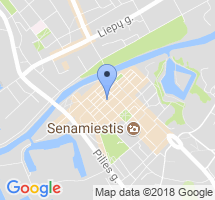 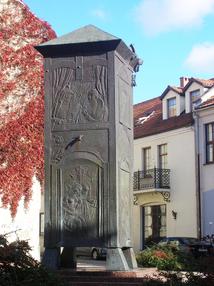 Algirdas Bosas bronze sculpture "Tower" rose up in Old Town in 1990. In this place there once stood a house which burned down during World War II.
It was decided to build some sort of architectural accent in the newly opened square. When the plans for a fountain failed, the contest winner, the bronze "Tower", rose up in the Old Town square. The creation was cast from a non-patina bronze, so as time goes on this sculptor adds that this process will be created by time. The sculpture is like a house in which "live" various epochs of Klaipėda residents and their traditions. Former architectural styles are reflected in it. In this Old Town house epochs intertwine, and traditions which have touched Klaipėda Old Town have left their mark. In the sculpture the citys history is immortalized - like storytelling themes. In the "Tower", time is pictured as a gnawing dragon.
The author of the sculpture also immortalized his beloved wife (holding a letter in her hands). On her lips one can even decipher her name. On the door handle one can barely see the authors self-portrait. The "Tower" has even more secrets. In it is composed the portrait of Jurgis Baltrušaitis with his poetry, whose work is endearing to the sculptor. The poets last name was incorporated by the sculptor just before the 90s, because during Soviet times, this poet was banned. The sculpture incorporates many names and dates significant to the sculptors life and work. (Sculpture author Algirdas Bosas).