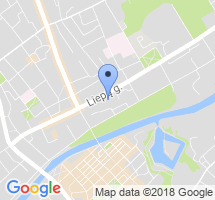 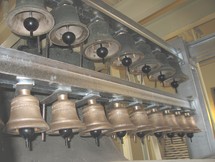 There are two carillons in Lithuania - one in Kaunas and one in Klaipeda. A propos, the set of 16 carillon type bells, cast in the 18th–20th century, was assembled and unsuccessfully tuned in the Vilnius Cathedral Bell Tower in 1967; some times Rimantas Gučas performed on it. Klaipeda carillon was cast according to Peter Schilling's design and put by the Schilling Bell Foundry experts (Apolda, Germany) in the tower of the main post office (built in 1893) in 1987. The instrument consists of 48 bells and a keyboard ranging in four octaves – c1, d1–c5. The biggest bell Kristupas weights 900 kg, the smallest – 15 kg. Total mass of the bells is 6800 kg, and with the construction-not less than 10 t. Klaipeda carillon is performed on by Kęstutis Kačinskas and Stanislovas Žilevičius. The bells of the Independent Lithuania, put in the (old) tower of the Kaunas Vytautas Magnum War Museum, rang for the first time in 1922. In 1919 the Lithuanian Seimas in the USA endorsed the lawyer Jonas Bagdžiūnas-Borden's proposal to cast Freedom Bell (financed by contributions of Atlanta Lithuanians) after the design of the USA Freedom Bell's (cast in Philadelphia in 1753). The Freedom Bell was brought to Kaunas on January 12th, 1922 and for the first time rang on February 16th. At the ceremony of the Bell's consecration the canon Juozas Tumas-Vaižgantas preached his famous Tower sermon – the 86-line ode. The Bell of an artistic and historical value (545 kg) was adorned with the Lithuanian State Emblem Vytis, donation inscription – Lithuanian Seimas in America for Lithuania / June 8- 11, 1919 and an epigraph by Lithuanian diplomat in the USA Bronius Kazys Balutis (1880-1967):
Oh, ring through the ages
For children of Lithuania
The one who does not protect the Freedom
Is not worth to live in it.

According to the Peace Treaty, signed on August 12, 1920, the Soviet Russia returned some bells that were taken from Lithuania during the WWI. The largest bell (3334 kg), began striking hours of Rochlitz mechanical clock, set in the tower of the Kaunas War Museum, in February of 1922.On February 21, 1922 the musicians Aleksandras Kacanauskas, Juozas Tallat Kelpša, Viktoras Žadeika, Juozas Žilevicius and Cnaniewicz, the director of the War Museum, General Lieutenant Vladas Nagius-Nagevicius and the museum's preserver, Major Petras Šeštakauskas decided to install the set of bells in the tower of the War Museum. Ohlson, the director of the bell foundry in Lübeck, selected nine bells from the ones returned from Russia and A.Kačanauskas tuned them. In October 1922 small automatic carillon kept ringing three times daily the melodies from both the Lithuanian anthem – National Song by Vincas Kudirka – and a church chant "Maria, Maria" by Česlovas Sasnauskas.In 1933 a modern carillon was ordered in Mechelen (Belgium) bell foundry Marcel Michiels to be put in the War Museum's tower, being erected in the garden, (architects of the ensemble Vladimiras Dubeneckis, Kazys Krikščiukaitis and Karolis Reisonas, 1931-1936). In spring of 1935 the carillon reached harbour of Klaipeda. But due to the tempering problems and other difficulties the instrument was installed in the Museum tower only in 1937. Kaunas carillon consists of 35 bells (the largest is 980 kg, the smallest – 30 kg, with the construction it weight 20 t), hand and feet keyboards (range a-flat, b-flat, c1-a-flat3) and an automatic ringing shaft. On February 15, 1937 in a special deed the bells of the carillon were named after battle names, and several bells were given separate names (Vilnius, Gediminėnas, Uhlan Birutėnas). On September 8 of the same year, on occasion of the 20th anniversary of the formation of the first Lithuanian battalion, the commission of the Vytautas Magnum War Museum Collegium-Colonel Juozas Šarauskas (chairman), musician Emerikas Gailevičius, writers Liudas Gira and Kazys Inčiura, Colonel Lieutenant Balys Sližys, Major Petras Šeštakauskas, Captain Simas Stanaitis – has named all bells of the carillon. . Up to the Soviet occupation, Stasys Šimkus "Lithuanians We Are Bom" and Česlovas Sasnauskas "Maria, Maria" accompanied each raising and lowering of the Lithuanian state flag in front of the War Museum. On August 1, 1940, after the Lithuanian national flag was solemnly lowered for the last time, the Freedom Bell and carillon's Battle Bells became silent as well. They rang again only in 1956, after Viktoras and Giedrius Kuprevičius restored them and started regular performances.The Freedom Bell, however, remained silent. It resounded again after almost fifty years of oppressive soviet occupation on February 16th, 1989, when the Lithuanian national flag was again raised above the tower. Performers on the carillon included Jonas Lechavicius, Juozas Tallat Kelpša, Viktoras Kuprevičius and Jonas Vaičaitis (John Vaich) started giving carillon performances before the WWII. Alone and together with his son, composer Giedrius Kuprevicius , he has performed over 10 000 carillon concerts and has arranged over 400 works for the instrument. Since 1983, carillonneur Julius Vilnonis has also performed on the instrument. Sometimes Raimundas Eimontas permorer at his own initiative. Carillon repertoire (applies to Kaunas carillon as well) consists of diverse music, specially composed for it as well as arrangements ranging from various folk melodies to classical works, contemporary to jazz compositions. It could be used as a solo instrument or in joined performances with various ensembles, symphony orchestra, choir and soloists. Since 1992, the Kaunas Jazz festival has included carillon performances of jazz and original compositions, includes Maurice Ravel-Giedrius Kuprevicius Blues-Bolero, which features the foremost Lithuanian jazz saxophonist Petras Vyšniauskas (*1957). Composers of original works for carillon include Viktoras Kuprevičius, Giedrius Kuprevičius, Vidmantas Bartulis , Zita Bružaite, Marta Irachkova (Czech Republic), Antanas Jasenka, Kestutis Kacinskas, Algirdas Klova, Algimantas Kubiliūnas, Giedre Pauliukevičiūte, Mindaugas Urbaitis, Tatjana Voronina (Russia), and carillonneur Julius Vilnonis. Since 1974, the World Federation of Carillonneurs unites the carillonneurs of the world. Since 1993, Lithuanian association „Carillonneurs guild” members are Giedrius Kuprevicius (president), Kestutis Kačinskas, Julius Vilnonis, Stanislovas Žilevicius, and an honorary member Hans Mollerup (Denmark). Kaunas' carillonneurs have performed in Belgium, Denmark, Spain, Poland, the Netherlands, France, Germany, Australia, and the New Zealand.