Sculpture "The guard of Old Town" 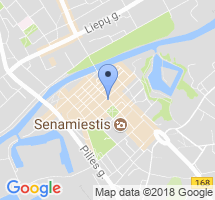 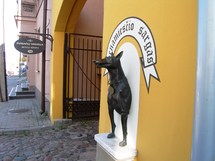 At the beginning of 2006, the entrance to Old Town was guarded by mans best friend - the dog. This sculpture of Doberman is named "The Guard of Old Town", and was presented by one of the enterprises. The sculpture stands in Turgaus Square, near Pilies Street. It will not only remind people of the companys anniversary, but also of the sign of 2006 - the year of the Dog. This original gift was presented to the city by businessmen to have fulfilled one promise to decorate the historical parts of the city. The "owners" of the Doberman hope that this dog will become one of not many accents and centers of attraction in Klaipėda. (Svajūnas Jurkus was the sculptor of the statue and Vytautas Paulionis was the architect).