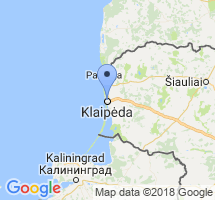 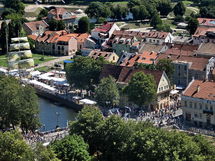 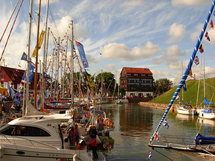 Klaipeda – is the third largest city of Lithuania.It is in the place of the confluence of Curonian Lagoon and the Baltic Sea, in the coastal lowland at the mouth of the Dane. There are 182 752 (2010) residents.
The city is on the Curonian spit National park and the Seaside regional park. There is large ice-free port of Klaipeda. There is a railway station of Klaipeda, sea port, 26 hotels, four Catholic churches, three synagogues, 10 museums, 4 theaters. Official City Day - August 1st (the city' birthday) at the end of July each year happens celebration of the Sea and also Klaipeda is famous for the annual International castle Jazz festival. There are three rivers flowing through the town: Akemna or Dane, Smeltalė and Kretainis. Klaipeda is 311 kilometre to north-west from the capital Vilnius. Great part of town is more to east of the sea and the lagoon. There is two estates in Klaipeda: the old (in the city center) and new (to the south of the center). Along the lagoon is a large port in the northern region to the Baltic Sea and the southern end at the pier wood - the bay of Curonian lagoon, located on the Island of Pigs back, there is an international ferry terminal. There is a unique Maritime Museum and Dolphinarium in Klaipeda. In the north of Klaipedathere is remaining natural dunes, leading walking and cycling routes to Palanga.
The area of the city is 98 km² - 38 % use for buildings, 1,4 % for roads, 8,45 % for farming, 14,08 % water, and 38 % for other.
Klaipeda has a temperate that latitude to marines, and continental climate, strongly influenced by the Baltic Sea. Winters are mild or cold, summer usually warm, but in individual years may occur in cool or hot. The average for January and February night air temperature of -5 ° C 0 ° C for the day. The average January temperature is a multi-highest in Lithuania and seeks to -1.4 ° C [1]. In July and August days, the weather warms up to an average of 20 ° C at night to cool down to +14 degrees. Heat waves are rare, but above 25 degrees in summer air temperature rises to about 12 times, and over 30 degrees - about once a year. The lowest air temperature has been -33 ° C +34 ° C, the highest.
Klaipeda – is the city on the Baltic Sea and the only port in Lithuania. How to get to Klaipeda?
Air. Palanga International Airport is 25 km from Klaipeda. For more information on port services: www.palanga-airport.lt
Sea. Klaipedais is the only port city and the only commercial port of Lithuania. Cruise ship terminal is located about 800 meters from the city center (for more information: www.portofklaipeda.lt). International ferry terminal is located 18 km from downtown (45 minutes way by car). Ferries sail regularly
Klaipeda - Kylis (Germany), Klaipeda - Zasnicas (Germany), Klaipeda - Karlshamnas (Sweden). For more information: www.lisco.lt
Transport services. The distance between Klaipeda and the capital of Lithuanian Vilnius is 330 km. These cities are connected by a freeway. The nearest walls of Klaipeda: Nida (Curonian Spit, Lithuania) - Russia (Kaliningrad).
Buses. Klaipeda bus station is 15 minutes walk from city center.
More about Klaipeda buses network: www.klap.lt. For more information on other buses: www.eurolines.lt
Trains. Train station is located near the bus station, only 15 minutes walk from city center. For more information: www.litrail.lt