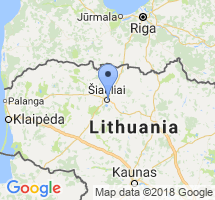 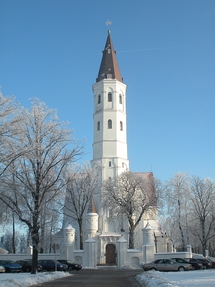 Siauliai – is the city in northern Lithuania, the fourth most populated city in the country. Population is 125 461 (2010), area 88 km ². The main festival is the city of Siauliai' birthday, the Sun Battle Day - 22nd of September Celebration because of the weather is usually celebrated in a week or two earlier. Residents of Siualiai are called siauliskiai other call the siaulieciai.It was previously classified as northern West Highlanders because of the migration has formed an intermediate between the Highlanders and Samogitians - West Highlanders siaulieciai.
Siauliai is located in the eastern Zemaiciai plain in the north part of plateu, in Musa, Dubysa and Venta rivers watershed. Distance is 210 km to Vilnius, Kaunas - 142 km, Klaipeda - 161 km, Riga - 128 km, Kaliningrad - 250 km. The total urban area is 81.13 square km, from them the green areas 18.87 square km, water - 12.78 square kilometers. City administrative land limits perimeter is 70.317 km.
Siauliai city without the St. Peter and Paul' cathedral does not shine with famous tourist destinations, but seven miles to the north there is of global significance Hill of crosses, whis is visited annually by 0.5 million pilgrims.