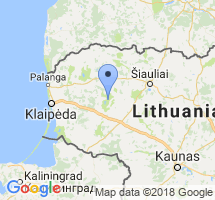 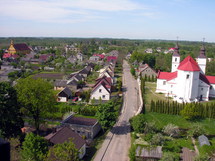 Varniai – is the city in the Telsiai district municipality, 33 km to south of the Telsiai, at the river of Varnele. It is the center of ward. Population is(2010) 1 218. City plan is radial. There are historical, architectural and artistic monuments - The House in wich in 1850-1864 lived bishop Motiejus Valancius, Varniai St. Apostles Peter and Paul church (the oldest in Zemaitija, built in 1691, the former Department of Special churchyard gate), a wooden Varniai St. Alexander' church (built in 1804), Bishop of Zemaiciai Museum in palace of priest Seminary. In Varniai pit there are discovered about 40 camps of the Stone Age. In 1982 in Duonkalnis, the former Birzulis isle was found on the tomb of the priest. For two km to southwest of Varniai, in Grauzai village near the countryside of Lukstas lake each year in July runs blues festival "Blues Nights".