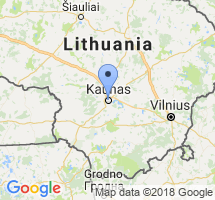 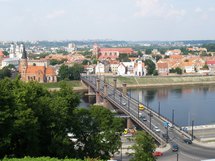 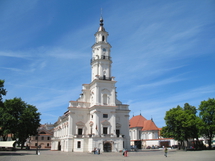 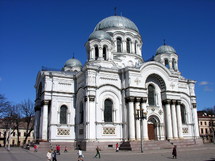 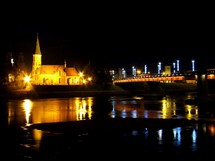 The city is almost in the center of Lithuania, in the middle Lithuanian lowland, located in the countrys' largest river Neris and the Nemunas confluence. Before the damming up the city with Nemunas, there was formed Kaunas Lagoon. On the other side of the city stagnants a lake of Lampedziai. There are 348 635(2010) residents in Kaunas, its’ area: 157 km². Website: www.kaunas.lt
Kaunas was found in 1361 year (first mentioned). The four stages of the historical development of the cultural heritage of Kaunas in territorial order of the country left different urban morphological structure areas. The city makes boasts of compact, well-preserved old town, in wich are a lot of valuable cultural and architectural monuments: Kaunas castle (XIII–XVII c.), Gothic House of a Thunder (XV–XVI c.), St. Gertrude and Vytautas Magnus churches (started to build in 1400 y.), „White Swan“ Kaunas City Hall (XVI–XVIII c.) and others.

Kaunas – is a major cultural center. There work 26 libraries (the biggest – Kaunas district public library), 7 profesional, 10 amateur theaters, 20 folklore ensembles, Lithuania only professional circus – Baltic Circus and jazz - Kaunas Big Band groups in Kaunas. Residents of Kaunas and guests like three summer months the ongoing international Pazaislis music festival with the participation of representatives of the elite world of music. Jazz lovers meet each other at the Kaunas Jazz Festival. War museum in the garden of war museum you can listen to the sounds of kariljon music.

Two of the largest rivers in Lithuania – in the confluence valley of the Nemunas and the Neris is located the second largest city Kaunas – is unique for its nearly one thousand years of history, geographical location and landscape. We suggest you to start from Kaunas castle which is in the of old town of Kaunas. In the confluence of the Nemunas and Neris located a stone castle was built in the end of XIII c. to counter crusader incursions. It was the the first Lithuanian defensive castle, wich became an important part of the citys' defense system. Settlements were founded around the castle, subsequently increased to the current city. In XV c. when Kaunas got Magdeburg rights, all the city life has moved into his current market square. Now here – is town hall square. The buildings surviving in the square have retained the spirit of the Hansa city. In the center of the square boasts town hall, often called „White swan“.It was start building in 1542 y. Town hall has features of Gothic, baroque and early classical. There stands and baroque Jesuit church and monastery in the town hall square.

Going towards the performance of one of the first Kaunas brick Gothic buildings – XV c. Vytautas church, pause at the house of Thunder – one of the most original flamboyant Gothic buildings in Lithuania. In the end of XV c. on the community of Hanseatic merchants built house wall XIX c., in the romantic period, was found a statue of the Thunder that's why the building began to be considered pagan temple. In the year of 1844 here was established first Kaunas Drama Theatre. Currently, in house of the Thunder is working Polish poet A. Mickevičius the life and work exposure.

Vilnius’ street – is the busiest and the most beautiful place in the old town. Once it was the main road, leading to the city hall of Kaunas. In this street, most of the remaining buildings are XVI century, some of them are reconstructed. Here you will find the Cathedral Basilica – the only Gothic-style basilican church in Lithuania. Several times it reconstructed, it took the Renaissance and Baroque elements. Cathedral has nine altars, sacristy overlaid with the crystal vault.

About the days when Kaunas was the provisional capital, we are reminded by Presidential Building, and next to it a garden with statues of former presidents of Lithuania.
By going farther, you willinsensibly move to the Avenue of Liberty – 1,7 km length pedestrian street, formed yet in XIX century. The Avenue of Liberty and Vilnius’ street combines the old and the new part of town, so you will see the main focus of the city in these streets.

In the Avenue of Liberty eyes are attracted by musical theatre, founded in this building in 1940 y. Now, there is primarily built operettas, operas in repertory also including ballets, plays for children. Iin front of musical theatre stands Vytautas the Great monument (skulptor Vincas Grybas), it was build in 1932 y. noting the Lithuanian Grand Duke Vytautas 500th anniversary of the death of (it was destroyed during the Soviet period, but regained its independence, re-restored).

In the Unity Square, you will find a symbol of Lithuanian statehood – Liberty statue (by sculptor J. Zikaras), built in 1928. In Stalinist regime the monument was demolished, and in 1989 re-established. There is also built monumental famous Lithuanian politicians and writters busts in the garden of war museum, burning an eternal flame, wooden crosses reminds those who died for Lithuanian independence. In this square you can listen to the music concert of bells.

In the back of Pedestrians street St. Archangel Michael (Garrison) church faces. Neo-Byzantine style building with all the features of Orthodox house of prayer’, was designed by Russian architects and built in Kaunas for war garrison. Later the temple was converted into art galleries. Now it is the church of Catholic.

The central part of Kaunas is surrounded by slopes. That’s why Kaunas is the only one of the oldest towns in Lithuania that has a vehicle - funiculars. Into the hill arising carriages in Zaliakalnis and Aleksotas- and the vehicle, and entertainment. Aleksotas funicular connects the old town of the city with Aleksotas. At the cable car is equipped a viewing platform, which offers a beautiful panorama of the city. By the funicular of Zaliakalnis you can transfer from the city center to the monumental Church of the Resurrection, and also see the city from the top.

You will have a lot of experience by visiting in the nearby famous painter and composer M.K.Ciurlionis arts museum, in the unique Museum of Devils, Vytautas the Great war museum.

While in Kaunas, in a real fireplace of Lithuanian, you will really feel the spirit of the piece of the whole Lithuania.