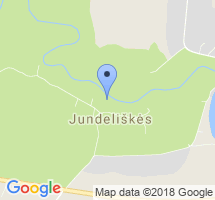 Jundeliškės manor is the only one remaining manor of those which used to stand along the River Verknė.  In the XIVth century, the folwark was formed in this place the owners of which were constantly changing.  In 1627, the manor went to the noblemen Eperyeshes of Hungarian origin who owned the manor for almost one hundred years. In the XIXth century, the owners of Paverkniai (Jundeliškės) Manor became Moravskiai family. Here, the more significant imprint was made by humanist, writer, therapist Stanislovas Moravskis (1802-1853).  He grew up in this manor and later being 36 years old returned and spent his last 15 years of life as a loner.  At that time, S. Moravskis not only wrote, took interest in vulnerary plants, but also fostered laid out park with rare introduced plant near the manor. S. Moravskis was the first to bring and popularize dahlias in Lithuania that beatify almost every homestead nowadays.