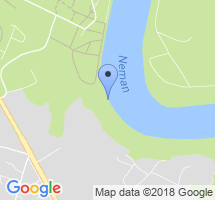 It is the old territory of the resort. The landlord Inacijus Kvinta bought the resort in the year of 1874 and started to landscape a park here. Tree alleys were planted in a special way that each path led from one building to another. Every alley had its own name, such as "Birutė Alley", "Love Alley", "Dreams Alley". Some of them were named simply by the tree names – "Spruce Alley", "Horse-Chesnutt Alley", "Linden Alley" or "Birch Alley". During the interwar period the park was supervised by Dotnuva gardeners. The fountain was built in the park in 1926. The intersections of the alleys were decorated with blossoming flower gardens. The orchestra in the especially designed pavilion was playing every day. The parterres of Vytautas Park were cherished during Soviet times as well. Exclusive parterre, so-called "Calendar" ,was blooming near the yellow pump-room at that time. The flowers of this parterre were replanted every day in order to form the date of the particular day.
The park was announced as a natural monument of the local importance in 1986. The park is quite decayed at the moment. Old sanatoriums and villas are demolished, no fountain and no parterres are present, and only the remains of the alleys can be found.