The Mound of Birštonas (Vytautas Hill) 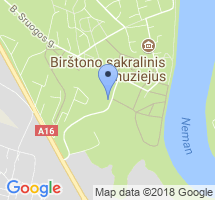 Situated in the right coast of Nemumas, in the South-eastern part of the Vytautas Park, Birštonas, Lithuania 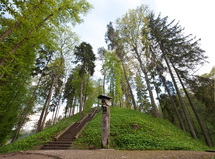 It is one the highest (the height of slopes is up to 40m) and best known mounds in Lithuania. At the end of the XIVth century a wooden castle of Birštonas was standing on the top of the mound and was a part of Trakai Duchy defence system and one of the hunting manors of Vytautas. The castle was first mentioned in historical sources in 1382 when, according to Wigand of Marburg, one of the three parts of crusaders' army attacking the Trakai Duchy "went towards Birštonas castle, but pulled back shortly". The mound of deep springy washes with slimy springy swamp and castle surrounded by consolidated lower ward was repeatedly attacked by the crusaders yet never taken. In 1401 Birštonas was mentioned as Manor of Vytautas, whereas in 1423 - as a hunting manor of his wife Julijana Vytautienė.  At that time, the castle was visited by dukes and other noblemen who arrived for hunts. Once in a while the castle was also used as a shelter from wars and other upheavals. King Casimir IV Jagiellon residing with his family in the castle of Birštonas in 1473, was hiding from the plague raging in the country.  Later, the castle lost its defensive significance and fell into ruins until the XVIIth century. In 1953, the archaeological exploratory researches of the mound were carried out by the Lithuanian Institute of History.  Thrown and mould ceramics with rugged surface was found. The findings are preserved in the National Museum of Lithuania. In 1968, the archaeologists determined the territory of the mound.  The mound is listed in the register of cultural values (the unique number 22963).