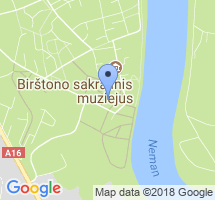 A word "kurhauz" is derived from German. It refers to holiday house concert hall with buffet (Dictionary of International Words).
Kurhaus of Birštonas is one of the few extant buildings of such type in Lithuania. In 2006, it was enrolled in the list of architectural heritage objects. In 1885 the resort town of Birštonas already had a restaurant which was renewed in the interwar period: decorated by a panel of K. Šimonis, expanded with an outside terrace, having tables under umbrellas. Based on the instruction of Balys Matulionis, the Director of the resort town of Birštonas, one of the first dietary catering institutions of Lithuania was opened in the Kurhaus.  During the World War II, it war possibly the only building of Birštonas that suffered fire which destroyed the interior of the building. After the end of the War, the building was reconstructed and obtained modern-day forms. The building is listed in the register of cultural values (the unique number 30782).