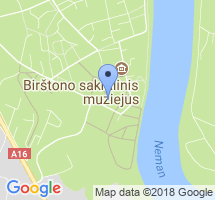 A word "buvette" (pump-room) is derived from French. It refers to a building on mineral spring from which the spurting mineral water is consumed (The Dictionary of International Words).
As far back as in the XIXth century blockhouses and roofs were built for the mineral water springs of Birštonas. The spring discovered and explored in 1879 was named "Viktorija" by the owner of the resort I. Kvinta (to honour his daughter). However, later on by proposal of the writer J. Tumas-Vaižgantas the spring was renamed "Vytautas". Since 1928 the place of the spring was marked by a whale-shaped sculpture with water jetting from its jaws. After the construction of Kaunas hydro-electrical power plant the sculpture which had become the symbol of resort was immersed under the raised waters of the Nemunas.  In 1960, hydrogeologists discovered a mineral water spring the chemical composition of which was similar to the taste of the historical spring well-liked by the President A. Smetona, writer J. Tumas-Vaižgantas and sculptor J. Zikaras. Today, this water is supplied only to the Yellow pump-room located in the Vytautas Park.