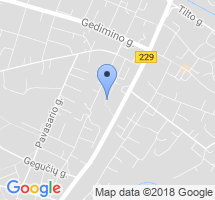 The one-nave evangelical Lutheran Church is unique due to the original 17th century wall paintings that have remained inside. The frescos depict the disciples Peter and Paul, evangelists John, Luke, Matthew and Morkus. Famous inhabitants of Kėdainiai of the 17th century are buried in the former evangelical Lutheran cemetery next to the church. There you can find memorial boards for Adam Freitag (1608-1650) - war engineer, stronghold specialist, doctor of philosophy and medicine, John fisher – chemist, postmaster and the private doctor of Jonušas Radvila, and Fridrichas Kaneinis (1663 – 1710) – the town doctor and the elder of the church of Kėdainiai. During the years of the First and Second World Wars, German soldiers were buried in the cemetery that was next to the church. In the beginning of 1999 the church was returned to the evangelical Lutheran community.