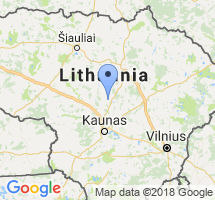 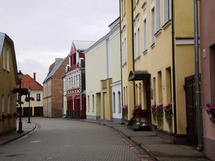 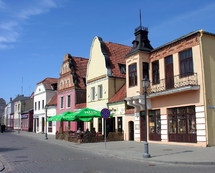 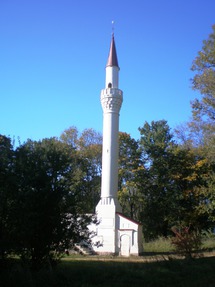 Kedainiai – is the city in central Lithuania, in Kaunas region, on both sides of Nevezis, 51 km to north from Kaunas. The center of Kedainiai is district municipality and the parish. In Kedainiai Dotnuvele flows into Nevezis and Smilga (on the west side) and Apple (from the east side) also flows into it. City is located in the center of the middle Lithuanian lowland. There are 30 668 (2010) residents.

Walk through the old town of Kedainiai.

Kedainiai, one of the oldest cities in Lithuania, attracts visitors for its many centuries enshrined various cultural and religious traditions. For the first time about this place was mentioned in 1372 in H. Vartbergės Livonian chronicle.
Restored and updated Kedainiai old town is currently ranked 87 ha. One of the oldest squares, maintained for the XVII century typical layout, – The Great rarket square. Around it there are history, culture values and the old XVI–XVII century buildings: someday there were glass houses, house of merchants Safleris, Mayor George Anderson House, a Renaissance-style City Hall (1653), one of three surviving in Lithuania. On the other side of the river Nevezis on the left bank, on a hill exposes Gothic XV century St. George church - the oldest stone building in Kedainiai.
We suggest you to visit the largest building of downtown – XVII century evangelical reformed church, in which basement now is established Radziwill noble mausoleum; After all a few centuries ago Radziwill had a great impact in town. In the crypt, in the ornate Renaissance and Baroque sarcophagus, are resting palatines of Vilnius, the Lithuanian Grand hetmans Kristupas Thunder, Jonusas Radziwill, and their family members. This is the only restored tomb of the highest ranking nobles in Lithuania.
In the XVI century at the Old market square your attention will be attract by XVII–XIX century complex of two synagogues that remained in the old market square. It consists of the XVII century end reminding summer halina synagogue, one of two baroque synagogues in Lithuania. In another - Small - there is located the Multicultural Center, in which are organized the exhibition. The original internal layout ("bobinčius") is still extanct in synagogue.
Stroll through the longest downtown Grand street. Currently, it is a restored and attracts tourists not only architectural monuments but also an abundance of services. Also visit the National museum, which is located in a former eighteenth century Carmelite monastery. Near the museum stands St. Joseph Church. This wooden folk baroque style church with a bell tower in 1703 started to buildof the Carmelites.
The bright high school history began in 1625, when the owner of the city reformator Kristupas radvilas set up a school. In 1940, after the closure of Vilnius Reformed School, school of Kedainiai became the main protestant school in Lithuania. Children of different nationalities studied at the school, future Calvinist priest, and Western European university students, there taught famous European scientists, and educational programs have been awarded under the adwanced methods. It is estimated that in 1625-1655 in the basement of gymnasium were George Joachim Rheto printing. There in 1653 was printed one of the main reformist publications in Lithuanian language "Kniga nobažnistės Christian". Adornment of the gymnasium - the inner courtyard under a glass dome, surrounded by arches, reminiscent of Vilnius, Cracow University. There are remained the original vaulted XVII century cellars.
The city center is decorated with a church of the Transfiguration of Christ. This is the end of nineteenth century Byzantine-style structure. Inside there is survived painting of the twentieth century, there are valuable icons. Evangelical Lutheran church you will find in the square of Rest. In this XVII century structure the unique wall paintings are maintain.
Drop by and to Vytautas Ulevicius wood sculpture museum, where are exhibited 84 oak sculptures. One of the most spectacular exhibit - a chess board; It would be interesting to play with shapes, height - even on 1.17m. In J. Monkute–Marks museum-gallery are exhibited this artist' paintings, textiles and graphic works, arranging exhibition of artists. She is a Lithuanian émigré artist since 1953 who lives and creates in Chicago.
Walk in Kedainiai will be memorable for you and will long-trap in memory.