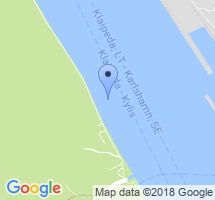 Kursiu nerija (Curonian Spit) is a narrow and long (97 km) band of sand, which stretches along the Baltic Sea, in the western part of Lithuania. The Curonian Lagoon washes its eastern shores while the Baltic Sea washes the western ones. A part of the Curonian Spit (overall 50 km) belongs to the Republic of Lithuania; the other part belongs to Russian Federation. In order to preserve the most valuable landscape complexes, Kursiu nerija National Park was established there in 1991. Curonian Spit is unique of its still drifting sand dunes, the sea side forests cherishing the hundred-years-old pine trees, dunes covered by hand-planted mountain pines’ carpet, white sand beaches and the old fishermen villages.
According to the legend, long time ago Curonian Spit was formed by a giant girl called Neringa, which poured sandy peninsula in the Baltic Sea to separate the peaceful bay from stormy sea and create an embankment for fishermen to live.
In 2000 – the World Heritage Committee has inscribed the Curonian Spit on the World Heritage List as the cultural landscape. Human habitation of this elongated sand dune peninsula dates back to prehistoric times. Throughout this period it has been threatened by the natural forces of wind and waves. Its survival to the present days has been made possible only as a result of ceaseless human efforts to combat the erosion of the Spit, dramatically illustrated by continuing stabilization and reforestation projects.
The area of the park is 26464 ha. 9764 ha are covered by land, and 16700 ha - by water.
The Curonian Spit is part of “Natura 2000”, the network of protected territories in Europe, connecting the most valuable habitations and territories. It is also belongs to HELCOM, the system of protecting territories in the Baltic Sea.

The dunes are an exclusive element of the Curonian Spit landscape. In Curonian Spit you can find and explore all stages of formation of the dunes: embryonic shifting dunes, humid dune slacks, decalcified fixed dunes, wooded dunes, white and grey dunes, which are famous for theirs unique beauty. 11 types of European importance protected habitats occur in Curonian Spit. Different habitats have rare species of insects, birds, and plants specific and typical for the place. Some of them are endangered and included in the Red Book of Lithuania.
The birds migration way from the Baltic Sea to the White Sea runs through the Curonian Spit. Every year millions of birds fly by there. It is unique place for bird watchers. Curonian Spit is important for large concentrations of migrating passerines and birds of prey. The Curonian Spit Lagoon and the Baltic Sea along the coastline are the important for migratory and wintering water birds. Also Curonian Spit is famous for the largest breeding colony of Great Cormorants in Lithuania.
There are 37 species of mammals living in Curonian Spit. Here you can meet fox and hare, boar and beavers, roe deer and even elk, others species of mammals.

Curonian Spit retains the following items of cultural heritage: fishing settlement, valuable of its ethno cultural, historical and aesthetic point of view, architectural works, which are unique in scale and archeological sites, mostly villages, buried under the sand.
The settlements of the Curonian spit until the 19th century were typical fishermen villages – monuments of special significance of kursiai community way of living and ethnographic traditions, which are not upheld anymore. The earliest fishing settlements were buried in sand, when the wood cover was removed. Those that have survived since the beginning of the 19th century are all to be found along the coast of the Curonian Lagoon. There one can observe the specific structure of fishermen homestead, traditional wooden dwellings, colored in dark brown and dark blue colors, decorated with specific wooden carvings, which concentrate in the gable.
Of special significance are the traditional grave markers known as krikstai. These are timber planks decorated with flowers, hearts, birds’ silhouettes, and even animal motifs.

Kursiu nerija National Park is an outstanding place which lets explore and get to know nature, culture and traditions in an active and environment friendly way. Curonian Spit is a perfect place for observing of wildlife, sustainable tourism, leisure and cultural self expression. Here you enjoy cycling, hiking and canoe tours or sailings trips, try traditional fisherman’s food. There are many places, which are visited of many people each year: Sea Museum and Dolphinarium, Kursiu nerija National Park Landscape Exposition, Historical Museum of Neringa, Galleries of Amber and Weathervanes, Thom Mann Memorial Museum, Ethnographic Farmstead of Fisherman. The Hill of Witches and cognitive path “Nature Puzzle” are favourite among children.
People of all nations and ages are welcome here!