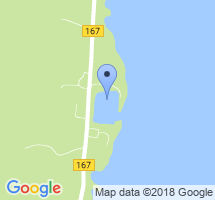 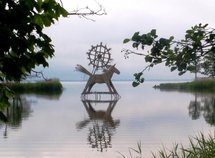 In 1855, while canalizing the waterway near Juodkrantė, the workers discovered amber in the silt soil. Shortly after that, various businessmen expressed their interest in this discovery. The first person to start the works of organized excavation of mud from the bottom of the Lagoon for amber search was former miller, owner of ships, later Klaipėda innkeeper Vilhelmas Stantynas. When merchants from Dancig joined him, a company of amber excavation from the Lagoon’s bottom was founded. The Government also contributed to the company’s activity, since it canalized the ships navigation channel between Klaipeda and the Coast and wanted to have a benefit from amber search works for itself as well. Having united the efforts, the company began to flourish.

The company encouraged the residents of Juodkrantė to get involved into amber excavation, too. It was in need of cheap labor force. Having the volumes increased, spacious bunkhouses were constructed to the north of Juodkrante, ship repair workshop was opened, port quay and workshops for production of the divers’ clothes were equiped. Gradually, Juodkrantė became an industrial town.

The works of amber excavation were performed only in the summertime – around 30 weeks per year by three shifts. The amber excavated from the Lagoon’s bottom had to be cleaned and separated from admixtures. From 1860 till 1890, approximately 75 thousand kilograms of amber on the average per year were excavated. Having the amber mining declined, in 1890, the excavation works contract was not renewed, therefore, the excavation works in Juodkrante were terminated.

While digging the gulf’s port, a collection of amber ware of the middle neolithic and yellow metal ages was discovered on the Lagoon’s bottom. The amber collection was later entitled as the Amber Treasure.

Ričardas Klebsas deserved the most for preserving the collection, therefore, quite often the treasure is named after him. Having organized exhibitions in various cities of the world, this treasure became known and famous in the whole world. After the World War II, only 5 findings were left of Juodkrante’s treasure: three human figures, a hanger of phallus shape, and double ornamented disc. Along with other remained exhibits of the treasure, they are kept in Museum of Geology and Palaeontology of Goetingen University. According to descriptions and drawings from the book of R. Klebsas, the artist Bronė Kunkulienė made two sets of amber moulages, which currently are exhibited in Palanga Amber Museum and in Mizgiriai Amber Gallery in Nida.