Wooden Sculptures Exposition At The Hill Of Witches (Juodkrantė) 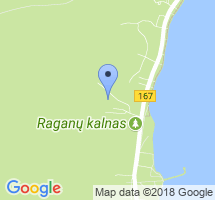 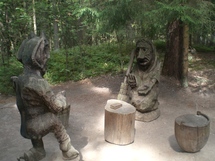 One of the most beautiful and oldest parabolic dunes in Juodkrante is the Hill of Witches. The slopes of the hill are overgrown with centuries-old pine trees, the meander leads through the shady woods to a 42–meter- high top. From there opens a view of beaming sea, through the pine trunks and firs the lagoon shines.

Formerly, the southern and eastern slopes of the dunes were woodless and from top of the hill opened ripping scenery of sand and water. In this place in the beginning of XIX-XX century the Lithuanians used to celebrate Rasas or St. John’s Day. Sailing-boats and even few steamships along the Curonian lagoon were coming from Tilze, Rusne and Klaipeda with choir members, musicians and all were celebrating the shortest night of a year up to the sunrise and looking for the fern blossom. This traditional feast was off by WWI.

Hill of Witches was not only beloved by the people - it is said that there witches and demons were cheering since time immemorial. Even the witch-goddess Rage took part in the annual jamboree of short nights.

It is a special place – the periphery of mystical and real world, where imagination comes alive and creativity rouses up. A forester Jonas Stanius from Juodkrante after feeling such atmosphere had conceived an idea that masters could carve fairy-tale characters and the legends existing in these fields for ages and after such extraordinary dwellers the hill of witches would revive.

In 1979 the first creative camp was held. Folk masters – carvers and smiths came from all Lithuania and made 25 sculptures. At present it has become an annual tradition in autumn to hold this symposium. The masters come to restore the old sculptures or make few new ones. The whole ensemble consists of more than 80 oak sculptures as a gift to Lithuania and visitors.