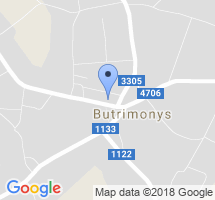 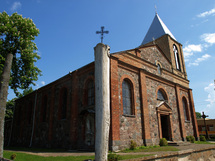 The cornerstone of the Sacred Saviour's Church in Butrimonys, built from the stone and brick work, was sanctified in 1906; however, the beginning of the First World War made an end to the construction works. The massive church with one tower was completed only in 1926. It has some elements of the Romanesque style. The church owns several valuable works of painting and folk art of the first half of the 19th century.