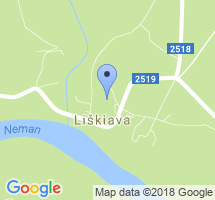 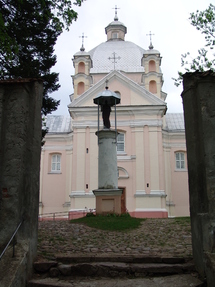 Liškiava is mentioned in written sources already since 1044. It is established on the incredibly beautiful left bank of the Nemunas, 8 km from the Druskininkai resort. In the current Liškiava area, people resided here already in 2000 BC. There are 4 archeological monuments in Liškiava: a castle mound, the Church Hill, a rock with the footprint of a bull and the so called “Rock of the Witch”. Liškiava is famous for its architectural monuments: the 14th-15th century castle, the remains of its tower, an end of the 17th century sacral ensemble (a church, once a Dominican monastery, a farmstead building); an 18th century fence of a churchyard, the stairs to the churchyard; a 19th century belfry, a monument post with St. Agatha’s sculpture; and many artistic remnants remaining in the interior of the church from the 17th to the 20th century. In the castle mound was a wooden castle dating back to 6 BC – 9 AD. The brick castle was built between the 14th-15th centuries and its construction was halted after the Battle of Grunwald (1410).