Lighthouse On The Hill Of Urbas (Nida) 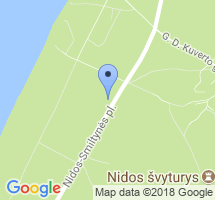 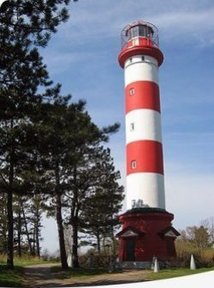 This is one of the largest lighthouses on Lithuanian seacoast. A 27 meter high lighthouse of red bricks was built in 1874. The cobble-stone path of 200 stairs led to the lighthouse which has still remained in present. A sharper eye will notice a carved swastika on one of the steps. Before building the lighthouse the Urbo hill (51.4 m height) was planted with pine trees.
It has been assumed in the world that every lighthouse is different in its shape, color and sent signals so another you will find nowhere else. During the World War II it was blown up, restored in 1953, and later reconstructed.
Nida's present lighthouse is made of ferroconcrete and painted in red-white horizontal lines. The tower is 29.3 m high. It sends flashlight signals, which are seen 41 km to the sea (22 sea miles).The crystal lens was made in Iziumi factory in Charkov district (Ukraine). Before it was installed in the lighthouse, the lens won an award on the exhibition in France. There are 6 bulbs on the tower, but only one is used at a time. If the bulb burns out, another one turns on automatically. Flesh signals are sent only during the night. The light turns on and off automatically by natural daylight. Radio signals are send all the time. The lighthouse has an autonomic power station. The goal of the Nida Lighthouse is to help sailors orienteering in the Baltic Sea. The flash signs (two short and one long) tell them that there is no seaport here. This lighthouse, as well as the lighthouse in Klaipeda, is included in the world book of light signals, marked on the sea navigation maps and described in pilot books.