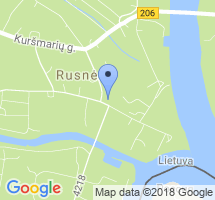 Rusnė - one of the oldest settlements in the Nemunas Delta, founded in the XV century Church Towers cock marks the 1419. This is the only city in Lithuania that is in the island. The modern bridge Atmata not always saves the local population from the spring floods. During the flood 40 thousand hectares of grassland is covered in water. People of Rusnė are kept safe from the floods by mound. Island has a Polders system equipped with 20 water lift stations. At the Dumblė lake the land surface is 1.3 m below sea level. During the summer Rusnė becomes particularly popular place. Tourists are coming not only from Lithuania but also from Germany, Denmark. In 2002, in Rusnė there was established an information center. The old tradition of fishermen revives – there was built and old sailing yawl according to the old drawing. In Rusnė island we can visit the restored church, the old post office, ethnographic K. Banys farmstead, Uostadvaris lighthouse (1876), the first water lifting station (1907). Rusnė - border town – on the other side of Skirvytė there is a region of Kaliningrad, Russian Federation.