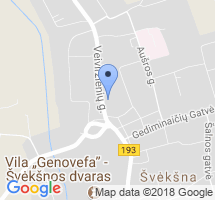 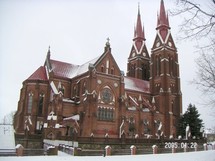 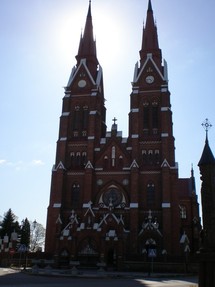 Sveksna - the town, famous for its highest point in its area (75 m) two-towered, red-brick church (1905) and also by the XVIII century park with impressive alley of lime which was set by Counts of Pliateriai, also it is famous for Genovaite villa, palace, ponds and sculptures. Sveksna town belonged to Zemaitija, that’s why its urban structure is different from the Klaipeda regions towns. In a center of the town there is a huge marketplace square. Of by the churches bridges through the restored gates we can access the old park, where we can find some very rare trees. In one of the buildings in the park you can find a museum of Sveksna. In the back of the alley - Genovaite villa, it was built in 1880, by the count for his wife. Next to the villa – countess beloved dogs sculpture, a sundial and steps, that leads us to the pond. In the great ponds island – there is a sculpture of a hunting goddess Diana. Count House and a park are at the end of the town behind the old cemetery. There is an old water mill, which is now equipped with a hotel and an excellent restaurant. Simonas Stanevicius famous nineteenth century Lithuanian poet, historian is buried in Sveksna cemetery.